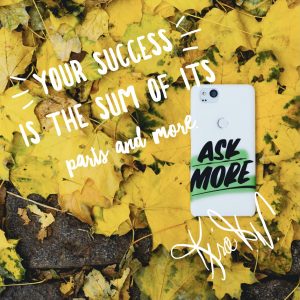 Among the successful there’s a common mythology that persists.

It’s as if they came up with a vision of the future and through their own sheer effort, sacrifice, and focus, they turned that vision into reality. Well, while that image of the heroic, maverick, and successful person happens from time to time. It is far from the most common case of success.

Successful people eagerly ask for help. They do this because they know they’re not jacks of all trades. They can’t do everything. They have specializations but they also know success requires other parts.

For example, if you want to be a successful online entrepreneur selling stuff online, you may be good at promotions, marketing, product selection, web design or affiliate marketing.

Your success is the sum of its parts and more.

If you have only two good parts and the rest is junk, what do you think will happen? Successful people focus on their core competency. They focus on what they’re good at.

These are the linchpins of their success. For everything else, they ask for help. Help can come in many forms. You can delegate. You can outsource. You can collaborate. You can put up things for discussion and brainstorming and then come up with implementations.

Whatever the case may be for these other things, you’re not relying on yourself. You are tapping into the eternal truth that two heads are better than one especially for brainstorming and coming up with ideas.
Believe it or not, when you are in a room full of people and you’re trying to solve a problem, you solve the problem in a way that doesn’t add 1 to 1, 1 to 1 is 2. But when you are in a group of people, exponential ideas come about.

Why haven’t I done it in the past? Why don’t you do it?

Well, most people struggle because of pride. That’s what it is. If you pick at that pride and dig deep, it leads to fear. Don’t let pride or fear hold you back from victory and success. That’s what you’re doing when you refuse to ask for help.

I’m not just  talking about asking for help. They eagerly seek it out. You’re not less of a person because someone helped you along the way. What’s important is you pay it forward. I’m not saying about paying back the person.

It’s more than that. It’s about paying it forward. When you become successful, there will be other people that you will encounter who are also trying to be successful. Help those people because somebody who achieved success in the past helped you get on the way.

That’s how you pay it forward. If that person helped you once, help others a thousand times. A thousand different people, help them individually.